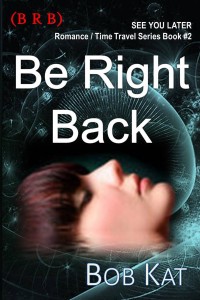 Disclaimer: This book was sent to me by the author, Bob Kat, for an honest review.

Plot: Kelly, Scott, Austin and Zoey have just returned from changing a girl’s life in 1966 and are a little battered and bruised from their adventure. But when a small voice pleads for their help to save her family from a murderer, they know they must respond.

They research the story, but there is very little information to be found. All they know is that it takes place on Crystal Key, a small private island off the Florida Keys. Since it appears to be deserted, they decide to pop in, gather clues, then pop back. It was a good excuse to spend a lazy day on a beautiful beach.

But from the first step, their journey back to 1980 goes horribly wrong. The area is crawling with drug traffickers and tens of thousands of refugees fleeing Cuba. They accidentally meet the young girl and her family, but their intervention puts them in the direct path of the killer.

Can they find out who he is in time to save the girl, her family . . . and themselves? Or are they destined to be a madman’s latest victims?

Opinion: This is the second book in the CUL8R series by Bob Kat, the amazing husband and wife duo, and a great continuation of the first book OMG (Oh My God). As I had mentioned in my review for book #1 of this series, this is a great read for pre-teens/teens, and any young adult or adult that would like to read something fun and different. The authors do a fantastic job of intertwining time travel in today’s era of cellphones and social media, as well as mixing the innocence of being sixteen with the uglier and darker side of the world.

BRB (Be Right Back) starts off the day after Kelly, Scott, Zoey, and Austin return from 1966 and their very first time traveling experience. Though they are still recovering from almost being killed by a deranged kidnapper, the group of four decide to once again listen in on their Telephone to the Dead. This time they here the faint voice of a little girl named Luisa claiming that someone killed her and her family in the year 1980. With little information (only the place, date of the murder, and the mention of a man named Manuel) the four decide to travel back in time once again to see if they can assist Luisa and her family before it is too late. But things prove to be much more complicated when they travel back in time and cannot figure out who the real killer is.

I am really enjoying how this series is coming together and evolving at a great pace. The writing is fun and easy but the authors mix in the right amount of mature events that will keep any age group interested and addicted. There are some aspects in this book, BRB (Be Right Back), that are driving me to prefer it over the first book, OMG (Oh My God) but also vice versa. I love the setting and idea for BRB to be on a private island owned by a mysterious and rich man named Manuel, who may or may not be the killer. Maybe I was getting too caught up in pretending that I was also on the island with the characters, bathing in the sun and enjoying a secluded beach with a margarita in my hand, but be serious…it’s hard not to with a setting like that! I found that the storyline worked beautifully with how the characters are starting to grow, but also how they are adapting to the idea of time travel AS WELL AS being sixteen and dealing with the awkwardness and events that come with being that age.

I was definitely wondering how the Kelly/Scott/Austin dynamic was going to turn out, but now I am wondering even more! BRB leads the reader into Kelly and Scott going on their first date at the beginning of the story, but later I found that maybe Kelly and Austin might start to develop something. I am expecting some hurt feelings and turmoil brewing, especially since Zoey is obsessed with Austin. Something I did notice while reading about Scott and Kelly being on their date, is that these characters act much more mature than normal sixteen-year-olds would. At that age, I would have NEVER had a casual conversation with a guy about how inexperienced we were and how we had never dated before. I mean that is definitely how it should be done, honest all the way, but sixteen-year-olds don’t converse with each other in that way. So in that sense I found the characters to be overly mature for their age…well except Zoey. She is just spot on.

Without giving away any spoilers, the ending to BRB wasn’t as “wrapped up” and explained as much as OMG (Book 1) was. I found that there was no explanation for the motive of the killings, and that the coast guards that spoke to the four teens didn’t seem to have a connection to the story at all. I am hoping that book 3 (BION) will start off explaining what happened and wrapping up book 2. Overall, this series is proving to be addicting and chaotic. I am hoping that book 3 will be a positive and needed installment to these books.

P.S. The kindle format of the book I received has quite a grammatical errors and strange formatting (ex: “..Al American meal..” or “ Dan grateful y took the food”). It can be a little distracting at first, but you barely notice it as you keep reading. Don’t let that stop you 😉