READERS! I have TWO new books for you to take a look at, and they are hosting giveaways as well! Be sure to follow the authors on social media and show them some support for all of their hard work!

P. Anastasia, author of the Fluorescence Series, has a new novel available for Pre-Order in August called Dark Diary.

She is also hosting a giveaway for a chance to receive a signed copy upon release. All you have to do is go to DarkDiaryNovel.com and sign up for the mailing list!

Worlds collide when a young woman with a dark past encounters a young man with an even darker one.

More human than vampire, Dark Diary is a quaint, sophisticated romance detailing the accounts of two lovers who have paid the ultimate price…

A forbidden romance in the vein of classics like Wuthering Heights, frosted with the seductive allure of the original Dark Shadows, Dark Diary documents a pair torn apart by time. The story is told by a 400 year-old immortal vampire, and a 21 year-old modern-day artist.

He’s trapped in a never-ending circle of guilt over the loss of a friend and lover: the daughter of an English Baron in 17th century Ireland.

She’s haunted nightly by visions of her own untimely death.

Together, they find solace by sharing secrets beneath the light of the moon. 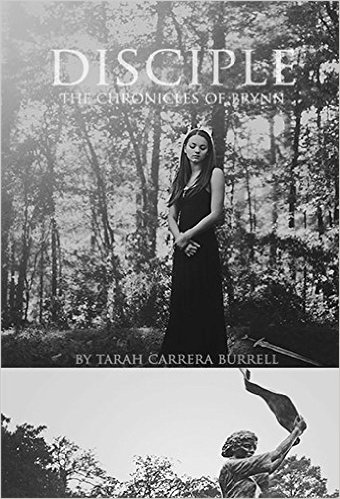 This is a new Paranormal Romance from author Tarah Carrera Burrell, which was published on Amazon.com in January 2016.

Amazon.com: Disciple: The Chronicles of Brynn

She will also be hosting a giveaway on March 1st on Goodreads.com for a chance to win a first edition autographed copy! Give her a follow on Instagram to look out for the link!

Brynn Bettencourt is about to embark on her biggest adventure in life – college. It has always been her dream to attend the Savannah College of Art and Design, located in coastal and historic Savannah, Georgia. However, that all changes when she meets Brandon, a fellow student and artist. Strange happenings begin to occur when she begins her new part time job, as she encounters Angelic creatures of sorts, ghostly apparitions and evil presences. A story not yet ever told of this thrilling take on romance, and of the battle between good and evil. Brynn will discover that she alone is the last Disciple.