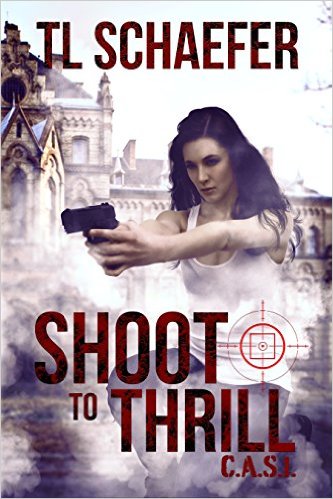 Disclaimer: This book was sent to me by the author, T.L. Schaefer, for an honest review.

Plot: The Colorado Academy for Superior Intellect (CASI) …only the best and the brightest may attend…and only if they possess a Talent the Meece Foundation deems of value. Founded in the late sixties, the Academy is the brainchild of Hugh Meece, pharmaceutical groundbreaker…and CASI is its shining jewel. Their motto: Exploring the last frontier…the human mind.

Special Agent Arin Thomas always gets her man, but when she embarks on a personal mission to uncover the details behind her best friend’s death, she discovers a world she’s never even imagined. A world where extrasensory powers are exploited, and where her badge makes her a big, shiny target.
Dr. Jonah Summers would be more than happy to run the Colorado Academy for Superior Intellect (CASI) if only people would stop shooting at him. But that’s a pointless wish when someone with a bottomless bank account and a direct line to Russian special forces has CASI and everyone connected to it in the crosshairs.
Arin and Jonah find themselves dodging a merciless killer with a hidden agenda while trying to fight their own attraction. It’s only a matter of time before one of them has to Shoot to Thrill in order to kill—or be killed.

Opinion: So a few months back (probably a lot of months back) I did a review for Behind Blue Eyes which was book 1 in the CASI installment. Today I am back with the review for book 2, Shoot to Thrill, and OF COURSE TL Schaefer has NOT disappointed me in the slightest. From the writing and the well-thought plot, to the new characters and the romance, this author has once again gotten me hooked. In comparison to book 1, this story sticks with the CASI theme but follows a new female lead of the FBI named Special Agent Arin Thomas. In this story we dig deeper into the past of Wes Burke, and the children and employees at CASI from years prior. Do not fret however, we still get a little bit of the beloved characters Sara Covington and Brian Roney from book 1!

After working through a tragic and complicated past, Special Agent Arin Thomas has worked her way to being the best in her field. But the death of her former partner, Wes Burke, has left a yearning to find the truth about his death and to set things right. But when Arin starts snooping around, what she finds out about her former partner, and the school that he had been in as a child, puts her in immediate danger. As Arin becomes acquainted with Dr. Jonah Summers, the man who runs CASI, she starts to constantly fight off an overwhelming attraction to him. Not one to lose focus, Arin tries her best to keep her mind on not letting her or Jonah get killed; especially when she learns that it is Russian Special Forces that are after them. With the help of Sara Covington and Brian Roney, Arin must find out how Russia has become involved and who the person calling the shots is before it’s too late.

FIRSTLY, I must start with the romance. As I have rambled on to you all before, we all know I am NOT a big fan of the erotica and overly graphic mushy-mushy. I am somehow always finding an exception when it comes to TL Schaefer’s stories, partly because her writing is so awesome. If you are not a fan of erotica like me, not to worry. There are only two prominent “scenes” in this story that would make you uncomfortable, and you can easily skip over them without missing anything important. The reason I have started out saying this, is because the books are way too good to pass up because of the erotica. Trust me on this one.

Anyways! I am LOVING book 2 of CASI, and I cannot stress it enough. The writing makes me SO happy; it’s descriptive and creative, thoughtful and straightforward, witty and comical but also stressful all at once. The author really knows how to write a thriller and keep the reader interested, which lead me to not being able to walk away from this story. I love that this stays with the same general idea of book 1, but introduces new characters and conflicts. Arin Thomas is another great example of a fierce and strong female character. She doesn’t take any crap and has that same hilarious snarky attitude that Sara Covington possessed in book 1. There is honestly nothing better than a badass female who plays just as hard as the men do, and who doesn’t ever want to let them win.

“I could be pissy about him becoming overtly, pig male, but decided on the coldly-competent route I’d psyched myself into this morning. I could be professional in a swimsuit, damn it. I tucked my piece into the holster stashed in my carryall, pushed up from the lounge chair and lulled on the bikini’s matching skirt.”

This story digs deeper into the background of CASI and also touches on a lot of the aftermath effects of the institution. There is a lot of detail and thinking that has gone into these characters trying to find out “who-done-it”, and I think all of the evidence and clues were compiled fantastically. Granted, I couldn’t figure it out for the life of me. I am glad that the author reintroduced us to Sarah and Brian from book 1, I thought these were fantastic characters before so I am glad to have been reunited with them. I am not quite sure if there will be a book 3, but one can only hope that there will be! I HIGHLY recommend these books to any reader who is looking for a great thriller or mystery with an amazing story-line.