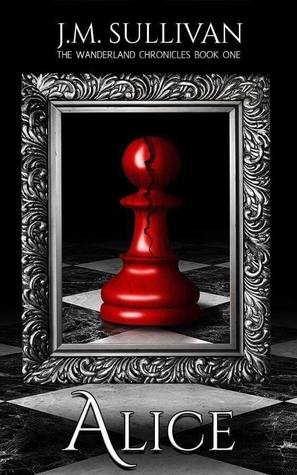 Disclaimer: This book was sent to me by the publisher, Pen Name Publishing, via NetGalley for an honest review.

Ever since the outbreak of the Plague, life hasn’t been easy, and for seventeen-year-old Alice Carroll, it just got worse. Her sister, Dinah, has contracted the ‘un-deadly’ Momerath Virus and without a cure, will soon be worse than dead. She’ll be momerath.

Alice must leave the safety of the Sector and venture into Momerath Territory to find the antidote – if it exists. Chasing a rumor about a mysterious doctor with the cure, Alice falls down the rabbit hole into Wanderland, where ravenous momerath aren’t the only danger lurking.

How doth the little crocodile improve his shining tail…?

Apparently with a bleakness as black as night, and a book review that just says:

Look. The first book in Alice: The Wanderland Chronicles isn’t necessarily bad…it’s just …not great.  I found it boring, dull, overly dramatic and cheesy, and felt that I had already seen/read this same plot about thirty other times. With that ridiculous zombie movement that hit Hollywood and every book shelf a few years ago, it’s hard not to feel like you have read EVERY single zombie story out there. But when I saw this, I had to request it from Netgalley because I LOVE an Alice retelling.

I’ve read the twisted versions, and I’ve read the sweeter versions. I had even read another Alice/zombie version years ago, Alice in Zombieland, and absolutely loved it. So naturally, I assumed this was going to be another series to add to my love of Alice in Wonderland retellings.

I found Alice to be…okay. Her character felt simple and not fully developed, almost like the author was just riding the coattails of the Alice that we already know and love and assuming they wouldn’t have to put much effort into giving her a full-blown personality makeover. I found that I enjoyed how much she talked to herself, which reminds me greatly of the original character, because it gave another instance for the reader to find out what was happening instead of us just “sitting in her head” and “watching” through her eyes. But the constant moments of her jaw dropping when the moment BARELY called for a jaw drop, or her saying things like “awesome” and “how interesting” without being given a chance to see WHY those things were “awesome” or “interesting” was just…EXHAUSTING.

As I continued to read, it seemed that none of the characters really had much substance or excitement spewing from their made-up pores. Chess was a slightly interesting character, with a creative name, and I liked that his character was left shrouded in mystery for a good length of the story. In my opinion, he was probably the most interesting of all the characters just because it seems like he had the most thought put into him by way of snarky comments and pet-names for Alice. There IS a love triangle in this story that involves Alice, so if you’re ALSO starting to tire from these shapes, then beware. It’s a romance crammed into just a few days, so enjoy if that’s your sort of thing.

My grumblings and negativity aside, there were some positives in this story. You’ll notice while reading there are random bold letters in different words and paragraphs. If you want to take the time, like you KNOW I did, then it will spell out a little message. I found it a cute little touch for this story, and a little treat for the reader if they caught on…even if it didn’t spell out a clue to the story, I still found it intriguing. Another positive was the action and fight scenes that were spilling from the pages. There was a LOT of exciting moments for Alice to show off her skills, even though I’m still wondering how she learned all those deadly and murderous moves.

Anyways…I was hoping this story was going to blow me out of the water. Instead, it just blew up an inflatable water toy for me and I floated around a pond for a while. It wasn’t horrible, but it didn’t keep my attention or really grab me in at any time. I had little invested in the well-being of these characters by the end of the story and even went as far as skimming most of the last half of the book just to end it. Hopefully the next Alice story I read, which is waiting patiently on my Netgalley shelf, will be a little better.