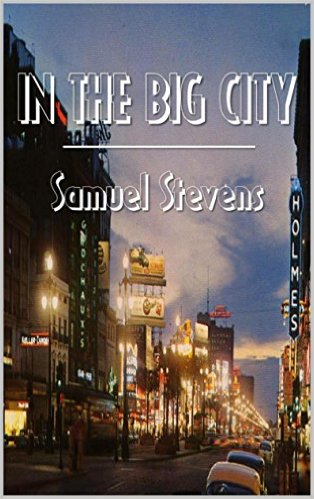 Amazon.com – In the Big City

Disclaimer: This book was sent to me by the author, Samuel Stevens, for an honest review.

Plot: Collection of six short stories, set in areas both familiar and exotic.

Meeting With the Tribe: An American volunteers for the Spanish Civil War, albeit on the Nationalist side.

Beach Signals: A French Foreign Legion veteran returns to the United States to find his best friend changed for the worse.

In the Big City: Successful novelist Nick Wolfe finds himself against the zeitgeist of the 1960s, and in hot water with a girlfriend he can’t get rid of and a potentially career-ending interview with The New Yorker.

Showing and Telling: Nick Wolfe contends with teaching writing and the politics of academia.

Opinion: Though historical themed short stories are not normally my “go to” genre for reading; I found this book to be quite interesting. With six short stories in total, this book can give each reader something different in each read.

This book contains six short stories: Meeting with the Tribe, The Humanitarian, Sketchbook: Special Activities Division, Beach Signals, In the Big City, and Showing and Telling. Meeting with The Tribe follows an American named Tom Fitzgerald who volunteers to fight for the Nationalist side in the Spanish Civil War, while also trying to realize if he is doing the right thing. The Humanitarian is about a man named Jack Caraway who is in East Africa doing research for his work as a writer. Jack meets a young woman named Eileen who has come to Africa to teach English and to try to make a difference, unlike Jack who is only present to observe. Sketchbook: Special Activities Division is an original excerpt from the author’s novel Phoenix Operator. This story follows the travels of Jack Erickson and his partner Vick while they reside in Vietnam. Beach Signals is about a soldier named Eric who has just returned to the US from spending time in the French Foreign Legion. Eric reunites with his friend from college, Cohen, and realizes that things are much more different than he anticipated. In the Big City is about a young writer named Nick Wolfe in the 1960’s. The story tells of how Nick cannot seem to get rid of his obnoxious girlfriend Melissa, and about an interview he did with The New Yorker that turned out to be less than stellar. Showing and Telling continues with the character of Nick Wolfe a few years later, where he is teaching about writing.

Doing reviews for short stories are difficult, because I try my best to not give too much information away to the reader. With that said, I am not going to go into any more detail about what happens in each short story…I can’t spoil the endings for you guys! In short stories, the author is placed with the difficult task of trying to get the reader to connect with their characters in a rather short time. I think my favorite stories would have to be In the Big City and Showing and Telling. I found the character of Nick to be the most developed and thought out of all of the other characters, though I still think there could have been more to be said of him. This work, in comparison to other short stories I have reviewed, honestly through me for a bit of a loop.

In other short stories, I notice how each author tries to hide specific meanings or messages in each story they create. Part of the enjoyment of a short story tends to be the idea of trying to figure out what the author isn’t saying rather than what is blatantly being said. In the Big City didn’t seem to have any of these quirks wrapped into it, which made each story fairly straight forward and easy going. Though I would have liked to get a little bit more out of each story; the author really seemed to enjoy creating stories from historical periods and times, which I found highly refreshing. There were a few typos and grammatical errors: missing words, lost commas, and confusing sentences; but the overall book had a nice flow and each story was unique. I am interested to see how the author’s writing improves as he continues to write; as well as what new stories he comes up with.